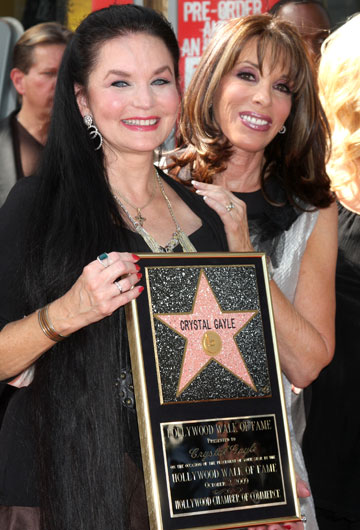 Crystal Gayle (born Brenda Gail Webb; January 9, 1951) is an American country music singer. Best known for her 1977 country-pop crossover hit song, “Don’t It Make My Brown Eyes Blue”, she had 20 number-one country hits during the 1970s and 1980s (18 on Billboard and 2 on Cashbox) and six albums certified gold by the Recording Industry Association of America.

Gayle became the first female artist in country music history to reach platinum sales, with her 1977 album We Must Believe in Magic.

Also noted for her nearly floor-length hair, she was voted one of the 50 most beautiful people in the world by People magazine in 1983. She is the younger sister of the country singer-songwriter Loretta Lynn and the singer Peggy Sue and a distant cousin of singer Patty Loveless.

Gayle has a star on the Hollywood Walk of Fame, near Lynn’s star.

She was the youngest in the poor coal mining family of ten. She was also the only one of the eight children to be born in a hospital.

Her older siblings are:

Webb’s family moved north to Wabash, Indiana, when she was four. Four years later, her father died of black lung disease. Though a shy child, Brenda would sing along with country and pop songs on the radio, and she was encouraged by her mother to sing for visitors to their house.

Inspired by the success of her sister Loretta Lynn, she learned to play the guitar and sing backup in her brothers’ folk band. While still in high school, she began to tour with her sister for a few weeks each summer. After graduating from Wabash High School in 1970, Brenda signed with Decca Records, her sister’s label. However, since there was already a singer named Brenda Lee with Decca Records, she was asked to change her first name.

Loretta Lynn suggested the name “Crystal” after seeing a sign for the Krystal hamburger restaurant chain. Brenda Gail Webb thus became Crystal Gayle. In 1971 she married Bill Gatzimos, her high-school sweetheart; they have two children and a grandson.