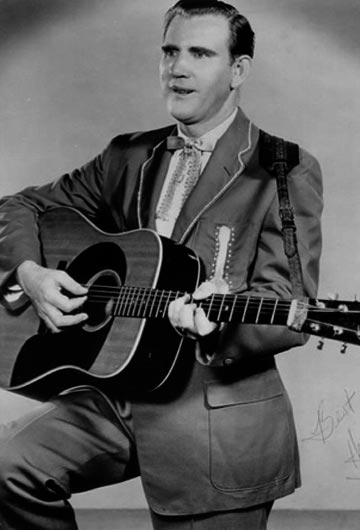 Frank “Hylo” Brown, Jr. was born in River, Johnson County, Kentucky and began his career as a performer on radio station WCMI in Ashland, Kentucky in 1939. Soon, he moved to WLOG in Logan, West Virginia and their “Saturday Jamboree”. Six months later, he moved with his family to Springfield, Ohio. He began composing songs and performing on local radio stations in Ohio.

During an appearance at WPFB in Middletown, Ohio he received his nickname “Hylo” because Smoky Ward, who was on the show, couldn’t remember his name and started calling him “Hi-Lo”. That nickname was a humorous indication of Brown’s presumed vocal range. In 1950, he recorded with Bradley Kincaid at WWSO studio in Springfield. Four years later, Brown wrote a song, Lost To A Stranger, that was sent to Ken Nelson, the A & R man of Capitol Records. The song was meant to be recorded by Kitty Wells but instead, Nelson offered Brown a recording contract if he recorded it himself. On November 7, 1954, he cut his first recordings for Capitol Records.

Lost To A Stranger became his first hit. In early 1955, he formed the “Buckskin Boys” performing on the WWVA Jamboree in Wheeling, West Virginia. In 1957, he joined Flatt & Scruggs on their “Martha White Mills” shows, and he was regularly featured in solo performances as well as with the Foggy Mountain Boys. He renamed the “Buckskin Boys” calling them “The Timberliners”. The Timberliners consisted of Brown on guitar, Red Rector on mandolin, Jim Smoak on banjo, Clarence “Tater” Tate on fiddle and Joe “Flap Jack” Phillips on bass. After his Capitol contract had expired, Brown signed with Starday Records in 1961. He retired in 1991 and moved to Mechanicsburg, Ohio.