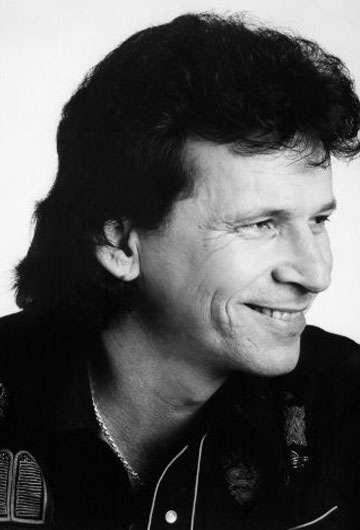 Gary Ronnie Stewart (May 28, 1944 – December 16, 2003) was a country musician and songwriter known for his distinctive vibrato voice and his southern rock influenced, outlaw country sound. During the peak of his popularity in the mid-1970s, Time magazine described him as the “king of honkytonk.” He is remembered for a series of country chart hits from the mid- to late- 1970s, his biggest hit being “She’s Actin’ Single (I’m Drinkin’ Doubles),” which topped the U.S. country singles chart in 1975.

Stewart was dropped from Kapp and then from Decca, but a series of demo tapes, including some countrified Motown tunes, found their way into the hands of producer Roy Dea, who convinced Jerry Bradley to sign Stewart to RCA Records. He returned to Nashville in 1973 and recorded a cover version of “Ramblin’ Man” by the Allman Brothers, both of whom were Stewart’s personal friends. It charted at only #63 on the country chart, but his follow-up, 1974’s “Drinkin’ Thing” became a top ten hit. His album Out of Hand was released in early 1975. “Out of Hand”, the title cut, became a #4 country hit and was followed by the #1 hit “She’s Actin’ Single (I’m Drinkin’ Doubles)”.

The album Out of Hand, which climbed to #6 on the Billboard country album chart, has since become one of the most critically lauded country albums of the 1970s. Rock critic Robert Christgau gave the album an A- saying that it “was the best regular issue country LP I’ve heard in about five years.” Rolling Stone gave it high praise as well, stating that, “With practitioners like Stewart around, honky-tonk—and rockabilly—may not be dead yet.” Thom Jurek of Allmusic later gave the album five of five stars and stated that a “strong case could be made for Out of Hand as one of the Top 100 country records of all time. It might be in this writer’s Top Ten!” Country music critic Bill Malone called Out of Hand “one of the greatest honky-tonk country albums ever recorded.”

Later in 1975, MCA released Stewart’s old Kapp material scoring a #15 hit with the single “You’re Not the Woman You Use to Be”. For the rest of the 1970s Stewart played the honky tonks with his road band, The Honky Tonk Liberation Army, and recorded similar albums with modest success for RCA: 1976’s Steppin’ Out; 1977’s Your Place or Mine (which featured guest artists Nicolette Larson, Emmylou Harris, and Rodney Crowell); and 1978’s Little Junior. These albums spawned several hit singles, including: “Flat Natural Born Good-Timin’ Man”, “In Some Room Above the Street”, “Single Again”, “Your Place or Mine”, “Quits”, and “Whiskey Trip”. His 1977 ode to marital distress entitled “Ten Years of This”, from the album Your Place or Mine, was a favorite of Bob Dylan and a #16 hit.