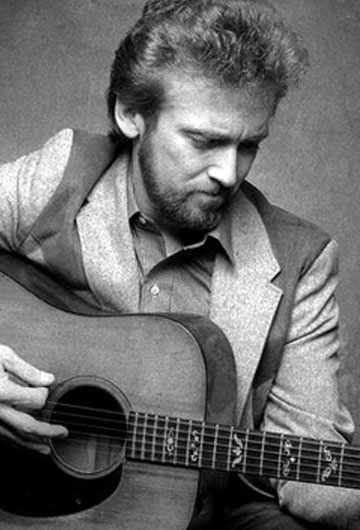 Born in Ashland, Kentucky, Whitley grew up in nearby Sandy Hook, Kentucky. Whitley began his career there in 1970, performing in Ralph Stanley’s band. Establishing himself as a lead singer in bluegrass music, Whitley moved to Nashville, Tennessee, in 1983 and began his recording career there. His first Top 20 Country Hit single, “Miami, My Amy”, was released in 1986. While touring for his album L.A. to Miami, he married country singer Lorrie Morgan.

In 1988, his first three singles from his studio album Don’t Close Your Eyes, the title song, “When You Say Nothing at All” and “I’m No Stranger to the Rain” were number-one hits. He died in 1989 at the age of 34. His later two singles, “I Wonder Do You Think of Me” and “It Ain’t Nothin’”, were released after his death. Whitley continues to influence an entire generation of singers and songwriters.

In 1969 he performed in a musical contest in Ezel, Kentucky, with brother Dwight on five-string banjo. Ricky Skaggs was also in the contest. Skaggs and Whitley hit it off right away and quickly befriended each other.

Fifteen-year-old Whitley and 16-year-old Skaggs were discovered in Ft. Gay, West Virginia by Ralph Stanley who was 45 minutes late for a show due to a flat tire. Stanley opened the door of the club and heard what he thought were the Stanley Brothers playing on a jukebox. However it was Whitley and Skaggs, who “sounded just like me and Carter in the early days”. The two soon joined Ralph’s band. Whitley became lead singer for Stanley in 1974. Whitley also played with J.D. Crowe & the New South in the mid-1970s. During this period, he established himself as one of the most versatile and talented lead singers in bluegrass. His singing was heavily influenced by Carter Stanley and Lefty Frizzell. He moved to Nashville in 1983 to pursue a country music career and soon signed a record deal with RCA Records.

Whitley’s first solo album, A Hard Act to Follow, was released in 1984, and featured a more mainstream country style. While Whitley was working hard to achieve his own style, the songs he produced were inconsistent. Critics regarded the album as too erratic. Whitley honed his sound within the next few years for his next album, L.A. to Miami.

L.A. to Miami, released in 1986, would give him his first Top 20 country hit single, “Miami, My Amy”. The song was followed by three more hit songs: “Ten Feet Away”, “Homecoming ’63”, and “Hard Livin’”, The album also included “On the Other Hand” and “Nobody in His Right Mind Would’ve Left Her”. “On the Other Hand” was pitched to Whitley before Randy Travis released the song as a single and when Whitley’s version wasn’t released as a single, Travis released his in 1986, as did George Strait with “Nobody in His Right Mind Would’ve Left Her”.

During his tour to promote L.A. to Miami, he met and began a romantic relationship with country singer Lorrie Morgan. The pair were married in November 1986, and they had their only child, a son, Jesse Keith Whitley, in June 1987. Whitley also adopted Lorrie’s daughter, Morgan, from her first marriage.

During the new recording sessions in 1987, Whitley started feeling that the songs he was doing were not up to his standards, so he approached RCA and asked if the project of 15 songs could be shelved. He asked if he could assert himself more with the songs and production. The new album, titled Don’t Close Your Eyes, was released in 1988, and the album sold extremely well. The album contained one of the many songs that Whitley had a hand in writing in his years at Tree Publishing, “It’s All Coming Back to Me Now.” Also on the album was a remake of Lefty Frizzell’s classic standard “I Never Go Around Mirrors,” and the song became a huge hit at Whitley’s concerts. The first three singles from the album—”When You Say Nothing at All,” “I’m No Stranger to the Rain,” and the title cut—all reached number one on Billboard Magazine’s country charts during the fall of 1988 and the winter of 1989, with the title track “Don’t Close Your Eyes” being ranked as Billboard’s No. 1 Country song of 1988. Shortly thereafter, “I’m No Stranger to the Rain” also earned Whitley his first and only Country Music Association award as a solo artist and a Grammy nomination for Best Country Vocal Performance, Male.

In early 1989, Whitley approached Sony Music Nashville chairman Joe Galante with the intention of releasing I Never Go Around Mirrors as a single. Galante approved of the musical flexibility that Whitley achieved with the song; however, he suggested that Whitley record something new and more upbeat. The result was a song Whitley had optioned for his previous album called I Wonder, Do You Think of Me?, and was to result in his next album release.