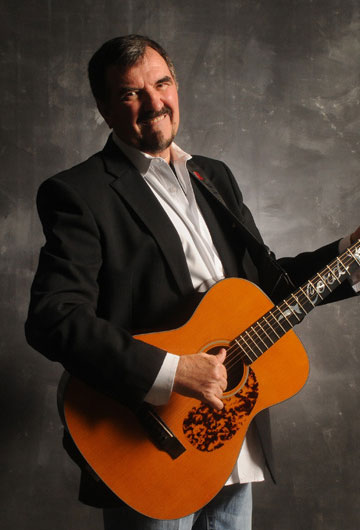 Larry Cordle (born November 16, 1949 in eastern Kentucky) is an American country and bluegrass singer-songwriter . Cordle is most famous for his song “Murder on Music Row”, which was recorded by George Strait and Alan Jackson and received the Country Music Association Award for Vocal Event of the Year, and CMA nomination for Song of the Year, in 2000.

Cordle also has a career of his own, with his band Lonesome Standard Time. He founded the band in 1990 with his friend Glen Duncan. He received a Grammy nomination for the group’s debut album, self-titled, in 1992. In 2005 Cordle’s band played at the Gettysburg Bluegrass Festival. On his album 2007 “Took Up and Put Down”, his sings “The First Train Robbery”; a song about the Reno Gang written from brother William Reno’s perspective. The Song was written by Chris Stuart.

Along with friends Carl Jackson and Jerry Salley, the trio (Cordle, Jackson & Salley) recorded the song “You’re Running Wild” on the Louvin Brothers tribute on Universal South Records, which features numerous country music stars singing songs made famous by the legendary duo. Entitled Livin’, Lovin’, Losin’: Songs of the Louvin Brothers, this project won the 2004 Grammy for Country Album Of The Year. The trio tours across the country and performs the hits they wrote for others.