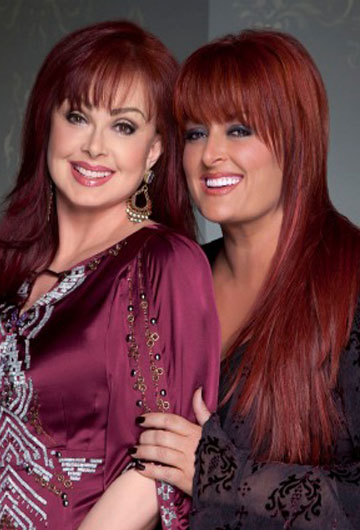 The Judds were an American country music duo composed of Naomi Judd (born 1946) and her daughter, Wynonna Judd (born in 1964). Signed to RCA Records in 1983, the duo released six studio albums between then and 1991.

One of the most successful acts in country music history, the Judds won five Grammy Awards for Best Country Performance by a Duo or Group with Vocal, and eight Country Music Association awards.

The duo also charted twenty-five singles on the country music charts between 1983 and 2000, fourteen of which went to Number One and six more of which made Top Ten on the same chart. In 1985, the duo appeared on the PBS music program Austin City Limits during Season 10.

The duo appeared on the PBS children’s show Square One TV many times. After eight successful years as a duo, the Judds ceased performing in 1991 after Naomi was diagnosed with Hepatitis C. Soon after, Wynonna embarked on a highly successful solo career. The two have occasionally reunited for special tours, the most recent of which began in late 2010.

Naomi Judd was born Diana Ellen Judd on January 11, 1946, in Ashland, Kentucky. She played piano at her local church. At age 17, she married Michael Ciminella, with whom she had Christina Ciminella, who would later be renamed Wynonna Judd. After Diana’s parents divorced, she and her daughter moved to Los Angeles, California, in 1968, and lived on welfare after she and Michael divorced in 1972. By 1979, Diana and her daughter moved back to Tennessee. Diana renamed herself Naomi and began playing music with her daughter, who sang lead and played guitar. At the same time, Naomi began studying to be a nurse.

Naomi was a dogged promoter of the act, and was reportedly propositioned, sexually harassed and dismissed when she tried to promote the act using a tape produced for $30 to Nashville music producers and to anyone who would listen. In 1983, they got their big break when Naomi convinced a record producer whose child she had cared for as a nurse to come to her home and listen to the act. The producer was “charmed” and the duo was signed by RCA and Curb. Their biggest hits, “Girls Night Out ” (1985); “Turn it Loose” (1988); “Why Not Me” (1984); “I Know Where I’m Going (1987); and “Grandpa” (1986); electrified audiences. Naomi was the performer of the group, and the business leader, while Wynonna was the artistic and lyrical leader.