Located in Leslie and Perry counties and was impounded from the Kentucky River by the Louisville District of the Corps of Engineers in 1967. The lake is 1,230 acres and is in the northern region of the Redbird Purchase Unit of the Daniel Boone National Forest.

Buckhorn Lake is surrounded by landscape as rugged as any found in the State. The plateau is deeply traversed by a series of narrow, winding valleys separated by steep watersheds and covered by a network of continuously branching streams. Originating in the southeast and flowing generally northwestward, the Kentucky River is one of the region’s major rivers.

At Buckhorn Lake you can camp or picnic at one of four Corps of Engineers operated recreation areas; fish, boat, swim or ski on Buckhorn Lake; hunt in the Buckhorn Lake Wildlife Management Area or Daniel Boone National Forest; walk numerous undeveloped trails; or enjoy a weekend getaway. 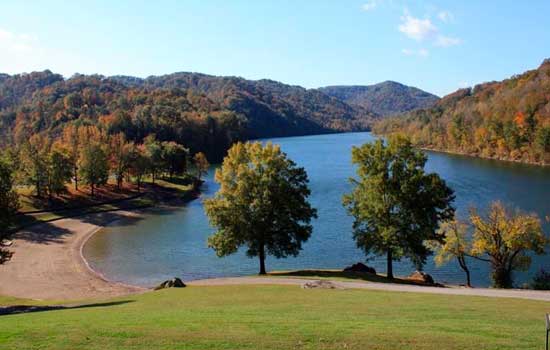