Jenny Wiley was a legendary pioneer woman who was taken captive by Native Americans in 1789. After nine months, she managed to escape and reunited with her husband. Around 1800, the Wiley family settled in what is now Johnson County. 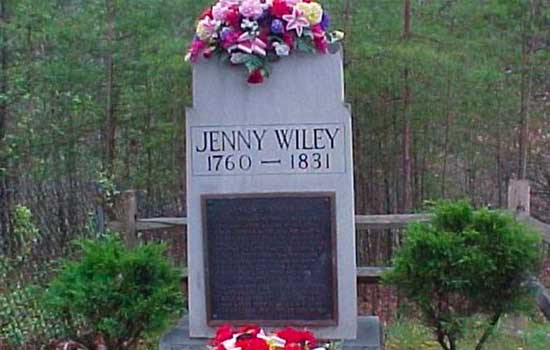 Jenny Wiley was pregnant at the time and both children were slain during her captivity. Jenny Wiley survived her ordeal and escaped nine months after her capture. After reuniting with her husband they settled in Johnson County and raised a family of five more children. Jenny died at the age of 71 in 1831. Her gravesite is located in the northern part of Johnson County at River.

To view Jenny Wiley’s gravesite: Follow the directions listed above for the pedestrian bridge. At the stop sign, turn right onto Ky Route 581. Turn right into the River Fire Department parking lot. You may park here, and walk the blacktopped path to Jenny Wiley’s gravesite. The path is approximately 0.2 miles and is a steady incline.
Foot traffic only, no pets allowed.