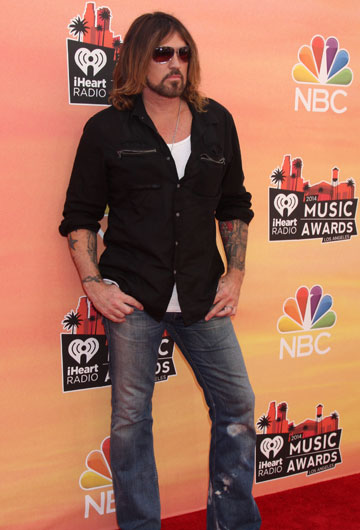 Having released 12 studio albums and 44 singles since 1992, he is best known for his number one single “Achy Breaky Heart”, which became the first single ever to achieve triple Platinum status in Australia. It was also the best-selling single in the same country in 1992 and was translated into more than 100 languages.

Thanks to the video of this hit, the line dance catapulted into the mainstream, becoming a worldwide craze.

Cyrus, a multi-platinum selling recording artist, has scored a total of eight top-ten singles on the Billboard Country Songs chart. His most successful album to date is his debut Some Gave All, which has been certified 9× Multi-Platinum in the United States and is the longest time spent by a debut artist at number one on the Billboard 200 (17 consecutive weeks) and most consecutive chart-topping weeks in the SoundScan era.

It is the only album (from any genre) in the SoundScan era to log 17 consecutive weeks at number one and is also the top-ranking debut album by a male country artist. It ranked 43 weeks in the top 10, a total topped by only one country album in history, Ropin’ the Wind by Garth Brooks.

In his career, he has released 35 charted singles, of which 16 charted in the top 40. From 2001 to 2004, Cyrus starred in the television show Doc. The show was about a country doctor who moved from Montana to New York City. From 2006 to 2011, he co-starred in the Disney Channel series Hannah Montana with his daughter Miley Cyrus.

As of 2016, he stars as Vernon Brownmule on the CMT series Still the King. For more information visit billyraycyrus.com