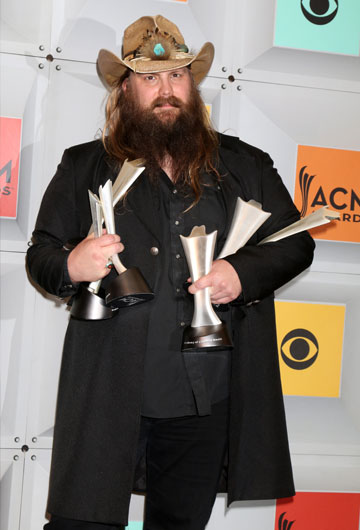 Christopher Alvin Stapleton (born April 15, 1978) is an American musician and songwriter. He is an established songwriter with six number-one songs including the five-week number-one “Never Wanted Nothing More” recorded by Kenny Chesney, “Love’s Gonna Make It Alright” recorded by George Strait, and “Come Back Song” recorded by Darius Rucker.

As a songwriter, over 150 of Stapleton’s songs have appeared on albums by such artists as Adele, Luke Bryan, Tim McGraw, Brad Paisley and Dierks Bentley. Among other artists, he has co-written with Vince Gill, Peter Frampton and Sheryl Crow. After serving as the frontman of The SteelDrivers from 2008 to 2010, Stapleton released his debut studio album Traveller in 2015, which earned him several awards, reached number one on the US Billboard 200 and went on to sell over 1.8 million copies domestically.

In 2001, Stapleton moved to Nashville, Tennessee to pursue a music career. As a songwriter, he signed with the publishing house Sea Gayle Music, a deal he got shortly after moving to Nashville. In 2007, he became the frontman for the bluegrass group The Steeldrivers. They had two hit records; each peaked at number 2 on the bluegrass chart before Stapleton left in 2010.

In 2010, Stapleton founded a Southern rock band called The Jompson Brothers. The band was made up of Stapleton on vocals, Greg McKee on guitar, J.T. Cure on bass, Bard McNamee on drums. They toured regionally until 2013 and at one point, opened for the Zac Brown Band.

The band independently released a self-titled album in November 2010. Personal Life Stapleton is married to singer-songwriter Morgane Hayes, who co-wrote Carrie Underwood’s 2006 single “Don’t Forget to Remember Me”. She had a recording deal with Arista Nashville. The couple met when they were working at adjacent publishing houses.

They have two children and live in Nashville. For more information visit chrisstapleton.com