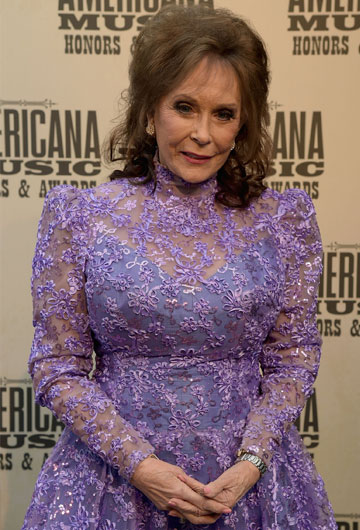 Loretta Lynn (née Webb; born April 14, 1932) is an American country music singer-songwriter with multiple gold albums over a career of almost 60 years. She has received numerous awards and other accolades for her groundbreaking role in country music, including awards from both the Country Music Association and Academy of Country Music as a duet partner and an individual artist.

She is the most awarded female country recording artist and the only female ACM Artist of the Decade (1970s).

Loretta was the second of eight children. She was named after the film star Loretta Young.[12] Ted Webb never got to see his daughter become famous, as he died in 1959 of coalworker’s pneumoconiosis (commonly known as black lung or black lung disease) before Loretta’s first single, “I’m A Honky Tonk Girl”, was released.

Lynn’s ranch, where she and her husband raised their children, is open for tourists to visit. For over 30 years the ranch hosted Lynn’s Amateur Motocross National Championship, the world’s largest amateur motocross race, in addition to GNCC Racing events. The centerpiece of the ranch is her large plantation home; it also features a replica of her parents’ cabin in Butcher Hollow. She no longer lives in the plantation home.[20]

During the 1970s Lynn purchased a home in Mexico and spent her time off from touring there with her twin daughters, Patsy and Peggy, and her husband.

Lynn has written over 160 songs and released 60 albums, and has sold 45 million records worldwide. She has had ten Number 1 albums and sixteen Number 1 singles on the country charts. Lynn has won dozens of awards from many different institutions, including four Grammy Awards, seven American Music Awards, eight Broadcast Music Incorporated awards, thirteen Academy of Country Music, eight Country Music Association, and twenty-six fan-voted Music City News awards. Lynn remains the most awarded woman in country music. She was the first woman in country music to receive a certified gold album for 1967’s “Don’t Come Home A’ Drinkin’ (With Lovin’ on Your Mind)”.

In 1972, Lynn was the first woman named “Entertainer of the Year” by the Country Music Association, and is one of six women to have received CMA’s highest award. In 1980, she was the only woman to be named “Artist of the Decade” for the 1970s by the Academy of Country Music. Lynn was inducted into the Country Music Hall of Fame in 1988[16] and the Country Gospel Music Hall of Fame in 1999. She was also the recipient of Kennedy Center Honors an award given by the President in 2003. Lynn is also ranked 65th on VH1’s 100 Greatest Women of Rock & Roll and was the first female country artist to receive a star on the Hollywood Walk of Fame in 1977. In 1994, she received the country music pioneer award by the Academy of Country Music.

In 2001, “Coal Miner’s Daughter” was named among NPR’s “100 Most Significant Songs of the 20th Century”. In 2002, Lynn had the highest ranking (No. 3) for any living female CMT television’s special of the 40 Greatest Women of Country Music.

On November 4, 2004, Lynn, who has been a BMI affiliate for over 45 years, was honored as a BMI Icon at the BMI Country Awards.

In 2008, Loretta Lynn was inducted into the Songwriters Hall of Fame in New York City. To date Lynn had been inducted into more music Halls Of Fame than any other female recording artist. In 2010, Lynn received the Grammy Lifetime Achievement Award for her 50 years in country music.

Loretta Lynn appeared at the 44th Annual Country Music Awards on November 10, 2010 and was honored for fifty years in country music. That same year, Lynn was presented with a rose named in her honor.

On September 25, 2012, Loretta Lynn marked her 50th anniversary as a Grand Ole Opry member. The only other women to reach this milestone have been Jean Shepard, Minnie Pearl and Wilma Lee Cooper. Lynn was honored with a tribute show that was broadcast on GAC-TV.

On August 8, 2013, President Barack Obama announced that Loretta Lynn would be awarded the Presidential Medal of Freedom. The press release read as follows: “Loretta Lynn is a country music legend. Raised in rural Kentucky, she emerged as one of the first successful female country music vocalists in the early 1960s, courageously breaking barriers in an industry long dominated by men. Ms. Lynn’s numerous accolades include the Kennedy Center Honors in 2003 and the Grammy Lifetime Achievement Award in 2010.” Lynn received two additional career-acknowledging awards in 2015. Miranda Lambert presented the Crystal milestone award to her from the Academy of country music. She also received the Billboard Legacy Award for Women in Music.